Making Sense of Your Menstrual Cycle

I know, you're wondering when I'm going to get to the stuff your teachers didn't teach you. You heard all this menstrual cycle stuff during that infamous “girls and boys to separate rooms” class in the fifth grade!

However, a brief review of the typical phases of your menstrual cycle can help you feel more clear about just when you can conceive.

…Comes from Some Other Beginning's End

The first day of your period is considered “Day 1” of any new cycle. Your period beginning means that all the work of your last cycle is starting over. It's your body's sign that it's time to “try again.”

In the past you may have found yourself feeling relieved to see your period every month. It's not quite so welcome a sight when you're trying to conceive. We're going to start here, nonetheless, and then move on to how you can make sure you don't have a period for quite awhile!

Your body is making efforts every month to produce an egg, nurture the sperm that can potentially fertilize it, and sustain any conception that takes place.

At the beginning of your cycle the lining that your body built up on the wall of your uterus to nurture a possible pregnancy begins to shed. The hormones that have sustained the build-up of the lining have stopped flowing (and no new pregnancy is producing hormones).

Your body is now beginning to produce follicle-stimulating hormone, or FSH. It begins in tiny amounts that gradually increase, sending messages out to the rest of your body. Your ovaries take action upon receiving this hormonal message and several follicles begin to mature, each one hoping to be responsible for ovulation in a couple of weeks!

As your period is ending your body begins producing another hormone called luteinizing hormone or LH. It's believed that it lags around 3 days behind the production of FSH. The LH secretion is the result of a complex interplay of hormones that is believed to begin with tiny amounts of estrogen being produced on the surface of the maturing follicles.

Does that sound confusing? There are a lot of hormones working in your body. It's really pretty amazing. But don't worry if it's overwhelming to try and “figure it all out.” A grasp of the basics will do. Back to your regularly scheduled cycle…

The Race Comes to an End

As your cycle moves on the follicle race has been on hot and heavy – and a winner is beginning to emerge. The losers don't get a consolation prize, they just disintegrate away. The levels of FSH and LH starts to decrease and estrogen levels begin to increase. 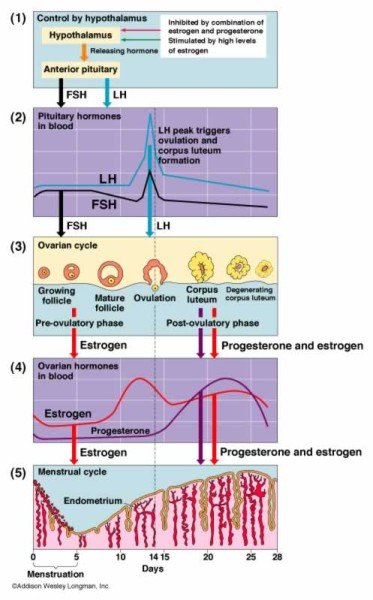 Another hormone, known as gonadotropin-releasing hormone, or GnRH is believed to work together with estrogen in this process, though it isn't as well understood as the others. Estrogen continues to rise causing the lining in the uterus to begin building up.

At this point you'll also begin to notice fertility signs. These accompany the different stages of your cycle and give you an awesome insight into just when you should try to conceive. I'll show you these signs more in depth in trying to conceive basics.

Just before ovulation estrogen is going to take an abrupt backseat when LH and FSH make a surge from the rear. You'll have a surge of LH – this is important because many ovulation tests are looking for this surge to help you be aware of just what's about to happen. The little follicle that's been helping orchestrate this race from it's quiet home in your ovary is now mature.

Time for the Last Hoorah

Around day 14 in the “average cycle” the follicle in your ovary is swelling and its wall is getting progressively weaker. The most mysterious of the hormones – GnRH – is again at work helping this occur. At some point the follicle will burst and out comes your egg – daintily called an ovum. This event is called ovulation.

Occasionally two follicles manage to mature with each other and each bursts to release an ovum. This is how you get fraternal twins. Identical twins happen when the fertilized ovum splits.

Your ovum is grabbed by soft hair-like projections called the fimbria and ushered into your fallopian tubes. It's here the egg awaits sperm – and here conception will occur if your TTC attempts are successful.

If no fertilization occurs within about 12 hours the ovum will disintegrate.

Your Body Keeps on Trucking

Regardless of whether your ovum is happily fertilized or not your body's hormonal symphony continues with the expectation of pregnancy.

A new hormone joins the mix after the egg exits its follicle. The follicle goes through a change to become the corpus luteum – this transformation allows it to secrete copious amounts of progesterone.

It, along with small amounts of estrogen, will cause your body's fertile signs to end. The lining of your uterus, the endometrial lining, continues to increase through this time. 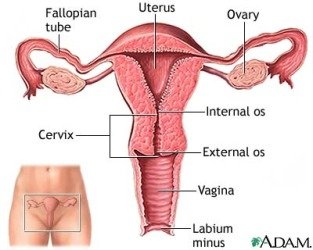 A fertilized egg will lazily float its way down towards the uterus, reaching it around day 21 of the “average cycle,” and find a thick lining awaiting it.

At this point LH, FSH, and GnRH are kept at very low levels by the estrogen and progesterone. Without LH to keep it going the corpus luteum will begin to disintegrate (it keeps secreting large amounts of progesterone as this occurs).

If fertilization has occurred the developing baby releases hCG, a hormone that signals the corpus luteum to keep going rather than breaking down.

If this hasn't occurred the last couple of days in this cycle arrive with drastically reduced progesterone. The corpus luteum dies, allowing FH to begin to build again. The lining of your uterus begins to shed, bringing with it your period and a new cycle.

So this is what's going on inside of you! But unlike your school textbooks hinted, it's not set in stone. You may have shorter or longer cycles. Things can delay ovulation (stress is a big one!) You may find that you're not even ovulating every cycle! And even if everything is running like clockwork you still have to contend with the odds of getting pregnant (which I'll teach you to sway in your favor, naturally!)

Move on to TTC basics now – then we'll explore some natural ways to boost fertility and regulate your cycle if it's a little unpredictable!

More Details on Your Cycle