Cervical Mucus and How it Helps You Get Pregnant

Just how important is your cervical mucus? Cervical fluid helps the hopeful sperm making their way toward your egg – helping you get pregnant!

You may feel clueless about your fertile fluids at this point – and that's understandable. Cervical mucus just isn't one of those things “modern” society talks to young women about. In fact you may be one of the countless women who worried something was wrong every month when you suddenly had a lot of “discharge.”

It made me – and a lot of other women – angry to realize that yes, we're normal… we don't have some weird infection, or some repressed emotions going on (and as much as your man likes to think so… it's not all his irresistible moves, either.)


(NOTE: Want the Top Easy Steps to Boosting Your Fertility? Use these 5 simple, evidence-based steps to get pregnant and carry your healthy baby to term. Get them here.)

The reality is, your body is designed to get pregnant, give birth, and nurse a child. And approximately every month your body gears up to get pregnant. Those hormones start building up – and so do your fluids.

Your cervical mucous goes from being mostly non-existent (or “sticky”/”tacky”) to being more like a lotion or cold-creme. Then it moves into a day (or a few days) of what you want most – stretchy, clear, lubricative fertile mucus. Just after this it shifts (usually pretty abruptly) back to your normal dry or “sticky” level.

And all this is normal. In fact, it's not just normal – it's what you want. This is your body's response to all the hormones flowing through you each cycle (read up on your cycle basics if you need more info).

The pinnacle, so to speak, of the cervical mucus cycle is “egg white fertile.” This fluid lets you know it's time – find your man and drag him to the bedroom. It's time to make a baby. 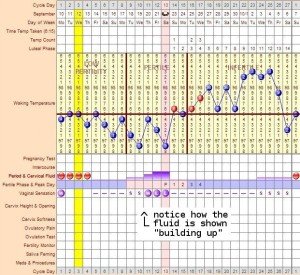 Luckily for you, nature has a lot of intelligence – when you have fertile mucus you're probably also going to have a strong desire to make love. This works to your advantage because your desire tends to be strongest when you're most fertile.

The reason this clear, stretchy, copious mucus indicates it's time to make a baby is because it gives your man's sperm a free ride – in more ways than one. Sperm are able to swim more easily through this rich fluid. It also helps nourish sperm as they make their way to and wait on the egg. If you haven't ovulated yet – sometimes you'll begin having fertile fluid a day or two before ovulation – the fluid keeps sperm healthy as they await ovulation.

Humans don't really go into “heat” as many animals do – but your fertile mucus is your personal notification that it's time to make a baby.

The change in cervical mucus after ovulation varies depending on your unique cycle, but typically women have one of a couple of different changes:

For some women cervical mucus dries up abruptly after ovulation. They go from fertile fluid to essentially nothing outside of normal vaginal lubrication.

Other women find that their fluids work quickly through a backward pattern of the build-up, and it may be 2-3 days after ovulation when they find their cervical fluids have dried up.

It's very normal to have light cervical fluid begin again in the few days before your period is due – it's often a light, lubricating fluid that's milky in color.

You chart your cervical mucus right along with your basal body temperature and cervix position/feeling. There are different ways you can do this.

On the free, printable chart I've provided for you there's a key. You use the symbol that corresponds with your fluid for that day:

Just put the symbol in the appropriate place on the chart. Take a look at the sample chart to see it.

There's another method, which I actually prefer. I use a charting software (Ovusoft) and it fills in the box as you move through your cycle. An empty box means you haven't recorded for that day. Around one quarter of the box filled in is a “D” (dry) day. Around one half is a “T” (tacky/sticky) day. Three quarters is a “C” (creamy/milky) day. And a full box is an “E” (eggwhite/stretchy) day. Here's a close-up of one of my charts so you can see the effect:

See how it gives a visual of “building up?” It gives you a idea of your fertility on any given day, and how your body is working over the course of your cycle. For that reason, I recommend filling in the boxes, rather than using letters, but do what works best for you.

Some women never really experience “dry” times and always have a level of “sticky/tacky” cervical mucus. That's OK. That's just your base pattern. And even when you're “dry” you'll probably feel a little wetness – this is just normal moisture produced by the vagina.

A true infection (as opposed to regular fluids) will cause burning and itching and the discharge may have a foul smell. Regular fluids cause no discomfort.

The best way to check your cervical mucus is to pay attention when you wipe in the bathroom. Just check a few times a day. If you want to check with your fingers you can do this – use two clean fingers and swipe near your cervix. If you check this way be consistent about it.

Turn your head away and notice how it feels, then check what it looks like. If you have egg-white fertile mucus you may notice the toilet paper just “glides” along when you wipe!

The best time to check for mucus is generally after a bowel movement because if you have any fluid it often gets pushed down as you go. You can also glance into the toilet – sometimes fertile mucus flows out very quickly!

This will quickly become second nature to you. Record the most fertile fluid you notice all day long – sometimes it will change between morning and afternoon!

What if the Ride Isn't Showing Up??

So what do you do if you don't see these cervical mucus patterns? 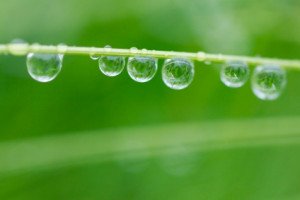 It could also be that your body just doesn't have the same pattern – you may not ever really experience a “dry” period. And your very fertile mucus may never get to “egg-white.”

However, if you're not noticing these patterns it's a very good idea to figure out what's going on. Cervical mucus is really important to getting pregnant because it greatly assists the sperm in getting to the egg. The thicker fluids (sticky/tacky, even creamy/milky) can even be hostile to sperm – preventing them from moving up to where they should be going.

The first place to look is your chart – are your cycles looking pretty normal, with good basal body temperatures and proper luteal phases? If they are not, work on those issues, and the suggestions below.

Next look at your nutrition. I had no good, fertile mucus when I first started charting, and I had a luteal phase defect (my luteal phase was too short). The first thing I did was make big changes to my diet – I added in a lot more good quality fats and I added a daily cod liver oil supplement. My cycles quickly normalized and I began having plenty of fertile fluid (we got pregnant several cycles later, and the first cycle we TTC).

There are also some herbs and supplements that may help you, but it's important to use them as part of an overall plan – you want your body to be in optimal health for conception.

You can also try lubricants. If you're really brave you can try using actual raw egg white. If you're not quite so brave, use a sperm-safe lubricant. Be sure you use the lubricants along with other strategies, so you're getting your body into an optimal state.

Cervical mucus is very important and it's worth taking the time to find out your patterns and improving the quality and quantity – this not only assures hopeful sperm of the help they need to get to your egg – it also means that your body is in a state of health and is ready for conception.