The very first hormone I came to know intimately was Human chorionic gonadtropin, or hCG. I'd been told I was pregnant with my first child, but the intense cramping and pain I was experiencing was taken to be sign of an impending miscarriage. The doctor I was referred to by the hospital declared I'd have my levels measured every other day. 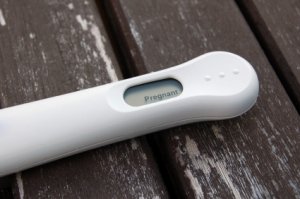 He didn't tell me much more than that, so I went home and figured it out on my own. Rising rates are a good thing…but let me backtrack a little bit so you get a better understanding than my preoccupied and disinterested doctor gave me:

After conception occurs and the fertilized ovum begins making its way to your uterus it begins to develop and release hCG. The job of this hormone is to signal to the corpus luteum (the follicle the egg recently left) to stay alive. Usually it would disintegrate away and stop working. That would be bad for your developing baby because it's producing progesterone, which your body needs to stop your period and nourish your baby..

Sidebar: Since hCG is produced by the newly conceived baby, it's the hormone pregnancy tests measure for. It's passed through your urine and is an excellent indicator that you're pregnant. It's also present in the blood so a blood test can be used to discover pregnancy.

Levels of the hormone climb throughout early pregnancy, peaking around 12 weeks or so. Throughout the rest of pregnancy the rate gets lower, though it does not return to pre-pregnancy levels until after you've given birth.

Back to why my doctor wanted to test my levels every two days: in general they'll double every 48 hours in pregnancy. This is an estimate, however – up to 72 hours is not unheard of and as you get farther along it may take up to 96 hours.

Your numbers can be discouraging if they're low, but you really can't become number-bound. Many healthy babies come from pregnancies with low initial levels.

Sometimes estimated conception dates are off, leading you to think your levels are low when they're not. Charting comes in really handy for such instances because it allows you to pinpoint ovulation and conception very closely.

All the same, low levels may indicate possible miscarriage or ectopic pregnancy.

High levels may sometimes indicate multiple pregnancy, or a molar pregnancy (which is not actually a viable baby – usually just a placenta forms). High levels could also indicate mistakes with dates.

The happy result of my blood draws every other day was regularly-doubling levels and I now have a lovely daughter to show for all those unpleasant jabs. You usually won't have your hCG levels tested – the hormone matters to you because it's going to give you two lines on your home pregnancy test!