Yes, I too find that I have that Grade 5 tendency to blush when I read about the male reproductive system. But rosy cheeks and nervous giggling aside, it's important to understand how the man's body works. There are times when fertility issues may need to be addressed for him. In fact, it's believed that men account for infertility about 33% of the time (women another 33% and combined/unknown factors in the remaining cases). 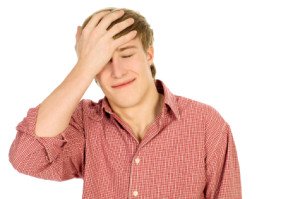 Your man is designed to get you pregnant, and the complexity of his design is just as fascinating as yours (info on how you're designed here)

The major difference between male and female is that your fertility is cyclical – you're not always fertile. Men are always fertile. His hormones do not vary and interplay on the level yours do.

Major components of the male reproductive system are on the outside of his body. The penis is the most obvious part of that system, and in some ways, the least important. It really does not matter what size a man's penis is – as long as he can maintain an erection and ejaculate into the vagina, he can get his sperm where they need to go.

Sometimes there are problems with fertility related to the penis – impotence is one issue. If the opening of the penis (where both urine and semen are released) is not positioned correctly there can be problems. It should be in the center of the penis. If it is on top of or below this could cause issues when you try to conceive.

A man's scrotum is also visible outside the body. It contains the testicles (men have two testicles), and helps keep them slightly cooler than the rest of the body. This is ideal for sperm production. It's here that testosterone is produced.

Once sperm are produced in the testicles they're stored in the epididymis (also inside the scrotum, resting next to each testicle).

Going Back in Before Heading Out

At this point the male reproductive system heads inside your man's body. The Vas Deferenes (also known as the ductus deferens) moves sperm from the epididymis to the urethra. 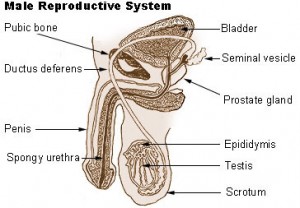 This tube moves sperm along under the bladder where they're joined by a thick fluid secreted by the seminal vesicles (men have two of these). This fluid nourishes the sperm and keeps them healthy.

When a man is aroused his penis becomes engorged (filled with blood – as a side note the vaginal walls also fill with blood and become more rigid when a woman is aroused). It's vital to the functioning of the male reproductive system for this to happen.

The penis is then rigid and able to enter the vagina. When a man reaches climax (orgasm) the sperm/fluid mix, known as semen, is forcefully secreted into the vagina. This is known as ejaculation.

Your man is producing millions of sperm every day. This may seem excessive but it's needed. The sperm help each other along to the egg. At least, some of them do – about half of all sperm go the wrong direction. Other sperm pick the wrong fallopian tube. (we won't make any assumptions about men from the behavior of their sperm ;p)

The sperm that do make it the right direction help each other move along up to the egg, where they work together to break through the outer coating of the egg. Though all sperm seem to help in this penetration, only one sperm cell becomes the winner and fertilizes the ovum.

When this fertilization occurs, the sperm and egg merge their genetic information and your new baby has begun his or her journey toward birth.